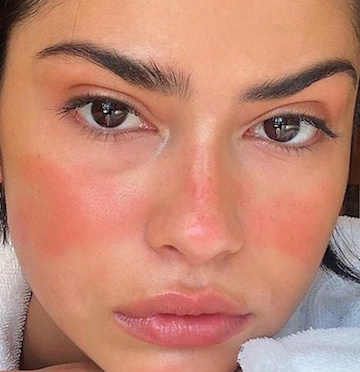 Rosacea affects over 16 million people in the US alone, and the numbers continue to rise.

ETR is the most common type of rosacea. Symptoms include facial redness (erythema), facial flushing accompanied by sensations of heat and stinging and visible capillaries or spider veins called telangiectasia.

ETR is treatable by avoiding known triggers and with topical medications and products to reduce inflammatory skin responses, such as Epionce and AzaClear.

ETR also can be treated with devices that target vascular issues such as IPL and Excel V, and with regular mandelic chemical peels.

PPR is characterized by persistent facial redness, and sensations of burning and stinging, and with acne-like lesions called papules (empty red bumps) and pustules (pus filled bumps). Areas covered by PPR may also appear to be swollen and severely irritated.

Epionce and AzaClear are our top choices of daily skin care products for rosacea.  Both reduce inflammation and redness while also deeply nourishing skin and strengthening skin’s barrier function.

Phymatous Rosacea is a severe form of rosacea characterized by excess tissue and skin thickening. It is the result of chronic swelling from rosacea without effective intervention and patient compliance.

The areas most commonly affected by Phymatous Rosacea are the nose (Rhinophyma), the chin (Gnathophyma) and the forehead (Metophyma).

Treatments to remove excess tissue include laser skin resurfacing and oral medications, such as isotretinoin. Strict compliance with oral and topical medications and other treatments are required to maintain results.

For ocular rosacea, it is imperative to see a dermatologist or ophthalmologist as soon as possible.

© 2008-2023 | Skin by Design Dermatology & Laser Center, PA | All rights reserved.
All trademarks, brand names, content and references
are the property of their respective owners.
↑
Responsive Theme powered by WordPress